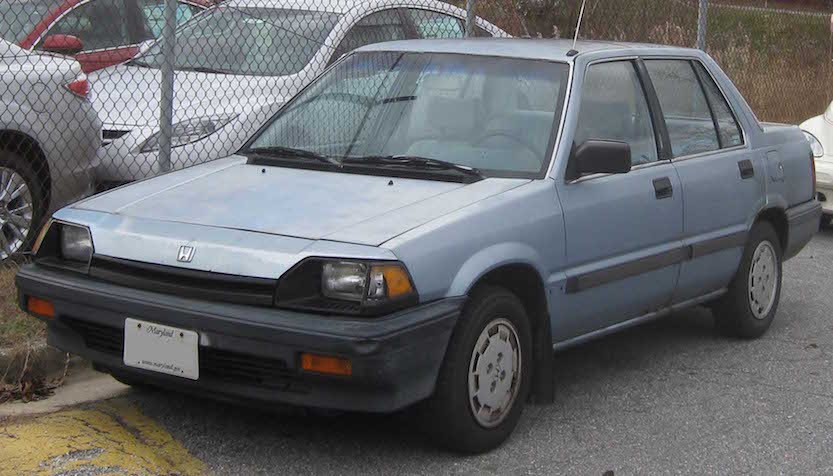 Laura and I drove from Chicago to Nebraska over a steamy hot 4th of July weekend.

We were buying gas on whatever fumes were left on our credit cards.

I’d been demoted from my sales job to production manager at a tiny manufacturing company. Now I was earning zero sales commission. To try make up the difference I took home “outsourced assembly” projects from work.

My project that weekend was tiny screw assemblies. We took the box of parts with us and one of us would assemble while the other drove. We got paid 4 cents for each one. 5000 assemblies, 200 bucks. Woo-hoo!

In the middle of Iowa, our car engine started sputtering. Had to stop for the night. No money for a hotel. My brother in law knew some people in Cedar Rapids and we stayed at their house.

He made some comment like, “Hey I thought a young sales exec like yourself was supposed to be earning big commissions.” Bit my lip. Built screw assemblies and watched TV.

Took an extra day for somebody to fix the fuel filter. Had to call my boss & explain why I wasn’t coming into work that day. One more step closer to getting the boot.

Who’s gonna hire a sales guy who’s been at it for 2 years and hasn’t hardly sold anything? What engineering company is going to hire an engineer who’s left engineering and spent the last 2 years in sales?

It’s 6:30 in the evening on a freezing cold January night in Chicago. Everyone else has gone home. There’s only 2 people in the office, me and my new boss Mike. It’s been a good sales day. I’ve just gotten my December check and it’s the biggest commission of my life.

I’m going to be late getting home from work. . . but Laura’s not going to be upset with me this time. I know that when I come in the office tomorrow there’s going to be more fresh hot sales leads waiting. More opportunities, more adventure.

The conversation Mike’s having with me is: “OK Perry, so what do we need to do to get you to stick around???”

I’m saying to myself: “Self, you and I sure could get used to this. Are you sure this is really happening?”

Yes, it was really happening. There were no words for the elation I felt. And it was only the beginning of a new and rewarding season. Of finally being useful to somebody, finding my groove, and digging myself out of the giant hole I’d created.

It was at that low point in Iowa that I finally began to throw the useless cargo off the ship.

It didn’t *seem* useless at the time. But it was holding me back. When you begin to ask yourself the questions you’ve been afraid to ask, when you start listening to the right people, situations change. And they can change *fast*.

Some people are doing extraordinarily well right now. But admittedly, most people are wrangling with tight credit, reluctant customers and broken systems.

Now is the time to fix those systems. The marketplace is beckoning you to move from where you’ve been to something new… and it’s asking you to do it with existing resources.

The good news is, you aren’t confined to your existing knowledge. Almost every problem you need to solve has already been solved by somebody else, somewhere. Within the existing resources you have is some new configuration that offers 10X more value to others than what you’re doing now.

Within your reach is someone for whom your skills and your offerings are highly prized.

Six months from today you can look back on your 180 day 180. My friend, you win in the end. IF you ask yourself the right questions. IF.

Don’t be afraid of those questions. And don’t let anyone steal your victory. It will be yours to keep and celebrate forever.

5 Comments on “The LOWEST Point of My Career”