Big-Ass Fans and the Naked Truth
About Attention & Controversy

This is a popular old report from the Perry Marshall archive. Much has changed since we first published it. Bill Buell has since moved on to other companies and projects. William “Refrigerator” Perry has also moved on and is no longer with Big Ass Fans as a spokesperson. Businesses shift and people come and go, but the principles remain true:

Make your message bold and unusual and you can own your market. 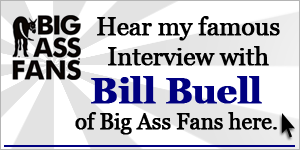 One of the advertisers that graces the pages of nearly every industrial trade magazine now is a certain company called Big Ass Fans.

This company makes very large fans for big industrial buildings, barns and warehouses, and they promote themselves in a very loud, obnoxious and funny way.

There’s definitely a lesson to be learned from Big Ass Fans.

Bill Buell, the Big-Ass Fan Guy continues to astound and amaze. I went to see his entourage at the National Manufacturing show in Chicago , where he had a prominent booth near the front of the exhibit hall and a big long line of customers waiting to get autographs from NFL star Refrigerator Perry.

This Bill Buell character is no slouch. Because he was bringing an NFL football star to the show, he was able to negotiate a really sweet deal with the trade show promoters on booth space. His spacious booth was right behind Grainger’s, and he got it
for a song.

So here he is with cheap space and a mile of prospects wrapped around his display, waiting to get autographs and chatting with his Big-Ass sales people about their heating and cooling problems.

I asked Bill about his background. During most of the ‘90’s he published a trade journal in the agriculture industry, a high quality mag that required subscribers to fill out a thoroughly exhaustive 2-page application in order to get on the list. (Compare that to the six or eight questions most trade mags require.)

Vendors desperately wanted to rent his list, which if I recall was fewer than 50,000 highly targeted prospects. But his list was NOT for sale. He meticulously groomed it and continued to run his magazine, all the while besieged with requests for access to his customer base.

Eventually one of those vendors bought his company outright for a hefty sum of money, just so they could own that list. (Note the lesson here, and my contention that your most valuable asset is your customer list. Even a reason for somebody to pay you millions of dollars for what you’ve built.)

A friend had a company called HVLS (High Velocity Low Speed) which had been taking a too-boring approach to selling their large fans, and the rest, as they say, is history.

Big Ass Fans is now advertising in over sixty industrial and agricultural trade magazines, and is growing faster than any other industrial company that I’m aware of.

Let me repeat myself. At a time when everyone’s griping and groaning about the woes of the economy, competition from the Asians etc. etc., these guys are making a killing. Triple digit growth rates. Right here in our own industrial sandbox.

Bill’s brilliant combination: A product with broad appeal (just about every large building has unsolved cooling and heating problems) and an incredibly unique identity in the marketplace. People walk up to Bill all day long at the trade show and tell them how they’ve ripped his ads out of magazines and showed them to their wives and kids, just because they’re so outrageous.

About Refrigerator Perry: I have no idea whatsoever, how much it costs to have him as their spokesman. However it’s probably less than you might guess, especially considering they’ve got an extended contract with him. There’s a very large number of famous people, former athletes, movie stars etc. who are eager to find such work, and agencies who specialize in making the deals. Don’t overlook the possibility of doing the same thing in your business.

Big-Ass fans has a Rants & Raves section on their website where they post comments they get on their Big-Ass marketing. Here’s a sampling:

As a professional organization, we feel the choice of your solicitations is inappropriate and crass. The use of profanity in publications for shock value is very risky when dealing with corporations who value respect and decency, such as we do. While you are certainly entitled to your marketing tactics, we are highly offended, and will not be purchasing your material.

You may not care, but I too am disgusted with the name of your company and your advertising. I am currently in the market for some air moving equipment, but would not even consider buying from you because of your choice of names. Change that and I might consider you. Otherwise, I’ll find someone else.

You guys rock. This might be the coolest name for a company ever. How can you forget a name like BIGASSFANS!!!!!! Whoever the marketing person is, is a god. I saw your bumper sticker on a guys car leaving Target and fell on the ground laughing going is this for real…..and here I am. If you guys have any promo stuff….bumper sticks, hats, shirts whatever I will be happy to promote you. By the way if you ever need a HR Manager let me know. I would love to put on my resume that I worked for Big Ass Fans Inc…..and oh yeah “The Fridge” is the the spokesman. By far I bet this is one HELL of a fun company to work for. I wish you the best of luck in your business.

Listen up: You have two choices, and only two.

1. You can be normal, acceptable, boring, and quickly forgotten.

2. Or you can be bold, flamboyant, offensive to some, loved by others, and long remembered.

Understand this: You will NOT be loved by some unless you are willing to be resented by others. You will not endear yourself to one crowd without antagonizing another. It ain’t never going to happen.

Every one of these people has a polarizing effect on the world around them. People either love ‘em or hate ‘em. These are people who have boldly presented themselves, their ideas and accomplishments to the world and ignored the naysayers.

So the question for you is: What bold, controversial and decisive stand can you take, that will polarize people – that will repel some and attract others?

Success lies on the other side of your answer to that question.

If You Don’t Want to Get Cut, Don’t Get Into a Swordfight

My 4-year-old son Cuyler loves swords. Just about every morning you can find him in the living room, standing there in his underwear, swinging his plastic swords all over the place and jousting with imaginary foes.

Today his friend Jack was over and they were playing swords in the back yard. Cuyler suddenly came running in the house, crying.

“What were you doing?”

“We were playing swords.”

“Well, Cuyler, that’s what happens when you play swords.”

Most people are just like my four year old when it comes to rocking the boat among their friends, industry, and peers. They like to talk about sword fighting. They like to watch it. They like to strut around and act like a gladiator in the safety and comfort of their living room.

But when their pinky gets cut, they start crying and run back into the house.

There are a lot of people who are living the professional version of Cuyler’s sword fighting – it’s all pretend, and they actually have no intention of making a difference, standing up for anything, challenging anyone, or championing any cause. They just stare blankly at the car ahead of them during their morning commute, they submissively comply with whatever corporate BS comes down the pipe, and they carefully avoid making any waves.

What a crummy way to go through life. If you do anything well, there are some people who aren’t going to like it. Heck, if you look on the Internet, you can even find people who are against Mother Teresa. So whether you’re selling fans in Kentucky, installing conveyor systems in Winnipeg, or saving the world in Calcutta, if you’re going to do it, do it in a big-ass way.

Big-Ass Fans and the Naked Truth About Attention & Controversy

p.s. This is a popular old interview from the Perry Marshall archive. Much has changed since we first published it. Bill Buell has since moved on to other companies and projects. William “Refrigerator” Perry has also moved on and is no longer with Big Ass Fans as a spokesperson. Businesses shift and people come and go, but the principles remain true: Make your message bold and unusual and you can own your market.