Tips from the Bose Marketing Playbook 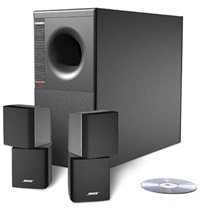 Before I tell you what every marketer and product developer should learn from a successful stereo speaker manufacturer, you need to know why you should listen to me in the first place.

I’ve been part of the audio industry for 21 of my 34 years – I built my first pair of speakers when I was 13, and as a young entrepreneur, made my first speaker sale to a paying customer when I was 14.

I studied electrical engineering and acoustics in college, then designed speakers at Jensen, where I was involved in projects for the Honda Civic, Ford Probe, Acura Vigor, Jeep Cherokee, Chrysler Cirrus/Stratus and even a skunkworks subwoofer project for Advent.

Today, as a marketing consultant to tech firms, I constantly talk to people who are frustrated because they have a “superior” product but can’t get anyone to take a serious look at it. If you’ve ever had that frustration, then take a look at how Bose attracts new customers.

Several years ago, I moved from engineering to the dark side – marketing. These days, I don’t design cutting-edge products; I help people publicize and sell them. So having walked along both sides of the fence, I can assure you there are a few lessons to be learned from a marketing-savvy, technology-driven company such as Bose.

Some people in the speaker business don’t like Bose. Bring up the subject in a bar full of audio engineers and you’ll get an earful of epithets and insults. Kind of like mentioning Keanu Reeves in a room full of aspiring actors.

There are two reasons for that. First, the company is wildly successful. Bose is often the first brand consumers think of when someone says “speakers,” and irritates designers at competing companies. Second – its designs violate all kinds of industry conventions, and Bose speakers do not always perform well according to the traditional criteria many speaker engineers consider important.

Consider the Bose Wave Radio. After people hear the story about the acoustic wave guide and integrated signal processing, it never occurs to them that this thing is a glorified boombox.

For example, their acoustic wave guide is valuable, not because it suspends the laws of physics for never-before-achieved bass response or some such thing, but because it creates a story for Paul Harvey and the rest of the advertising department to tell.

The waveguide is not better, it’s just different. And different is the key. Bose commands a lot more money for this product – more than almost everyone else out there. That really upsets engineers who know this stuff is not magic.

So here is the lesson: Most products have some kind of subtle innovation or twist inside, something that might not initially seem to matter but can, nonetheless, create an interesting story.

What untold story lurks beneath your product?

Other tactics from the Bose playbook:

I’m part of a newsgroup that discusses audio topics. I recently got a message from a guy named Alan who says, “I went out with this girl on a blind date. When I told her I built speakers, she asked me if I could make some just like those neat Bose speakers she saw in the store.”

So I told him this: “I’ve been in the speaker world for 21 years, three of them as a professional driver designer. Throughout my engineering career, I harboured a healthy disdain for Bose. During my Jensen days, when people would find out that I designed speakers, they would ask, “What do you think of those new Bose [AM5] speakers?” Translated this means: “As a professional speaker designer, can you comment on their wonderful breakthrough technology and the thunderous bass that comes
from those tiny little cubes?”

At the time, I viewed the AM5s as something designed to help buyers part with seven hundred bucks. A fantastic plan on Bose’s part, considering what I estimated it cost to manufacture them. I often told people what I thought, too. A couple of times, though, I had to remove my foot from my mouth when I learned that the person I was speaking to owned a pair.

For the last seven years, I’ve been away from the engineering side and in the profession of sales and marketing. During my first two years in sales, I had the exquisite privilege of living on baloney sandwiches and Ramen soup. Things started to turn around for me when I got through my thick head something Bose clearly understands and has understood for many years:

Don’t sell people what you think they should want.

Sell them what they want.

What do people want? Small, unobtrusive design. Exciting sound. Glamorous, impressive technology that will make their friends salivate and their wives amorous. (Note: huge, room-dominating Klipschorns or Cerwin Vegas don’t have that effect on most women).

Bose gives the people exactly what they want. Everybody else gives them a woofer, a tweeter and a simulated woodgrain box. Have a close listen to all those non-Bose $600 speakers on the showroom floor, and they all sound similar because most speaker manufacturers know how to get a reasonably flat frequency response.

Clearly, the people at Bose have the technology; no one can say they don’t. But they use their technology to their advantage, and they make a lot of money doing it.

So does that make the people at Bose bad people?

No, just fantastically wealthy people, with happy customers, who get more respect than most speaker guys out there.

And there’s a lot to be said for that.

Hi, this is Perry Marshall.

I’ve written a 9-day e-mail course called “Nine Great Lies of Sales and Marketing” which exposes nine of the most pervasive, ridiculous half-truths and misconceptions that have been perpetrated by sales managers, motivational tapes, ad agencies and self-proclaimed experts.

This course tells you the unvarnished truth about what it really takes to sell innovative, next-generation products and services in today’s hyper competitive marketplace – and why most companies make it a lot harder than it needs to be.

The first installment starts 10 minutes from now. You can unsubscribe at any time, and I won’t spam you or sell your email address to anybody – and that’s a promise.