At today’s 4-Man Intensive in Hong Kong, I had a Malaysian from London living in Australia; a German, a Scotsman and guy from Liverpool living in Thailand; an American living in Barcelona; a Japanese guy from Japan and 2 red-blooded Aussies. Our meeting room overlooked Hong Kong Harbor. Nobody was from Hong Kong :^> 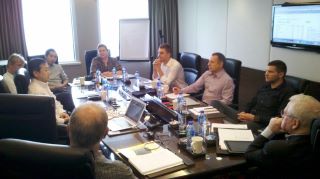 Every 4-Man Intensive is totally unique. This was the first one I've done anywhere besides my home in Chicago, and the first to have observers. A total blast!

It’s the first 4-Man that wasn’t at my home in Chicago; my adoption trip to China brought me here. Gotta pay for this adoption excursion, so a 4-Man in Hong Kong was perfect.

This was also the first time I’ve had people enroll as observers (they came but didn’t get a hot seat).

We tear each business apart and re-assemble it, and everyone chimes in, each person offering a different perspective. We save people months, even years of struggle because there’s such a high level of intelligence and experience in the room. 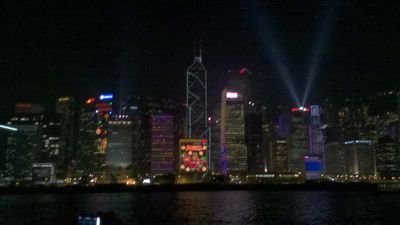 Hong Kong City Lights from our dinner boat in the harbor

Oh, and we also took a dinner cruise on Hong Kong Harbor to see the city lights at night.

Hong Kong’s success is surely one of the reasons Chinese Prime Minister Deng Xiaopeng said, referring to capitalism vs. communism, “No matter if it is a white cat or a black cat; as long as it can catch mice, it is a good cat.” In other words, if capitalism is as prosperous as Hong Kong, it can’t be all bad.

It’s so successful that when the British relinquished control in 1997, in keeping with their agreement with Mainland China, the Chinese government didn’t dare mess with it. While Hong Kong officially belongs to China, it enjoys economic autonomy. It has its own currency and banking system – and freedom of speech. 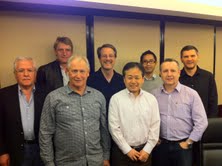 One of the attendees, who was in his 60’s, remembers when Christian organizations were sending relief supplies to Hong Kong after WWII. Hong Kong now rivals Shanghai as the financial capital of Asia.

Every 4-Man event is totally unique, because discussion is a full-contact sport and the chemistry of the personalities and industries never happens twice. We recorded the sessions and everybody gets an MP3 of the entire event.

I can’t predict when I’ll do another international 4-Man Intensive but the ones we do in Chicago are a blast!

7 Comments on “It doesn't get more international than this!”