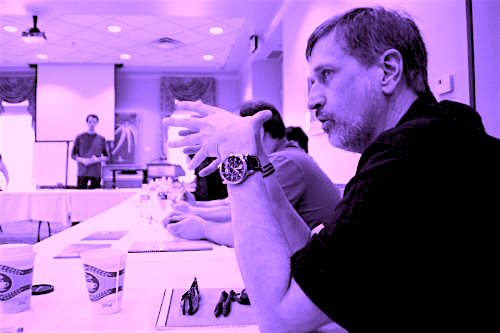 After four years of working the Vegas strip as a professional gambler, John Paul Mendocha was sitting in a restaurant booth with a couple of gambling buddies. His two friends were having an argument:

Out came a Glock. The guy planted the barrel on the other guy’s skull.

John said to himself, “Self, if you don’t exit this shady business real soon, your sad little carcass is gonna wind up in a ditch somewhere.”

So literally one day on a Tuesday afternoon, he walked away from the seedy world of gambling forever. He moved to a different state and got himself a real job.

His sales manager hands him a stack of leads. “John, I want you to get appointments with all 206 of these people.”

Four years of hustling on the strip have burned 80/20 into John’s brain. He knows 80% are a complete waste. Only 4% are strong candidates. He just needs to find a way to sort them.

So John devised one. It’s called The Five Power Disqualifiers®.

All 80/20 sales and marketing mavens know: You must DISQUALIFY people who don’t fit. First.

If they don’t have the money, or your solution doesn’t fit, or if there’s no urgency, then there ain’t gonna be no sale. Ever.

John knew that out of 206 cold to lukewarm sales leads, less than 5%—probably no more than 10—were actually worth a face-to-face. Less than half of those would actually buy. If he called all 206 and asked them the right questions, he could save himself a huge amount of time, then spend the rest of his time delivering exactly what the real customers wanted.

John reduced the sales process to five essential requirements that are always present when a sale is made. I know of no one else who has distilled sales and marketing to such a small number of fundamentals:

1. Do they have the money? Some markets consist of people who have no money. Sometimes the very market itself is defined as a herd of moneyless people.

2. Do they have a bleeding neck? A bleeding neck is a dire sense of urgency, an immediate problem that demands to be solved. Right. Now.

If you want to make the big bucks, your product has to deal with something that involves one or both of the following: a) Pain and great inconvenience, loss of money, threat of loss, and / or b) some craving for pleasure that borders on the irrational.

3. Do they buy into your Unique Selling Proposition? If you’re just going into a market, the question is, what big benefit will they buy into? What kind of deal would they snatch up in a hot second? What benefit do they want that the other guys are not promising?

A unique selling proposition (USP) is your unique answer to these questions:

4. Do they have the ability to say YES? I’ve got a friend who lost a bundle trying to sell a seminar to doctors. They had the money, bought into his USP, had a bleeding neck—most doctors were expressing grave dissatisfaction about financial matters that the seminar directly addressed—but it was almost impossible to get a piece of mail into any doctor’s hands.

Why? Because Helga the receptionist is intercepting their mail. She can say no, but she can’t say yes. Are you selling to an engineer who’s going to have to get approval from his boss? Are you applying for a job through the human resources department—knowing that HR can only say no, and only the VP can say yes?

5. Does what you sell fit their overall plans? If your service requires major brain surgery on the part of the customer, he ain’t gonna take your offer unless brain surgery is literally a lot less painful than the alternative (e.g., dying). Whatever you sell needs to harmonize with natural, existing forces—both on the inside and outside of your prospect’s world.

The Five Power Disqualifiers are exhibit “A” of 80/20 thinking. Each question gets rid of the bottom 80% of whomever you’re dealing with. When you’re honest with yourself about all five of these things, you’re automatically dealing with the tippy-top of the pyramid—less than 1%.

Sales is, first and foremost, a disqualification process, not a “convincing people” process! Step past the sick and the lame early in the game, and only deal with the healthy ones left standing. You will save yourself so much time.

Write the 5 Power Disqualifiers on a note card and pin it to your wall.

“Rack The Shotgun: ELIMINATE and focus on who’s left”

“If you don’t know who Perry Marshall is, unforgivable.” -Dan Kennedy, author of No BS Sales Success

“One of the all-time top 10 business books to impact your bottom line.” –Bill Harrison, Bradley Communications

“I thought ‘Oh, I’ve heard this before. Another book about 80/20.’ Shame on me. It’s PHENOMENAL!” –Tony Rubleski, author of Mind Capture

“Perry Marshall is about to blow your mind!”–Michael Gerber, author of The E-Myth

The Five Power Disqualifiers® is a registered trademark of Speed Selling Inc., and used under license.

25 Comments on “Stop Selling to Losers! The 5 Power Disqualifiers”