The oil spill in the Gulf of Mexico is probably the biggest ecological disaster of all time. It’s probably also the biggest corporate PR 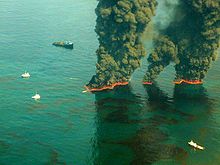 nightmare of all time.

Just last week one of my Roundtable members devoted his hot seat to strategizing a new viral marketing campaign propelled by BP outrage.

Millions of dollars will be made just by selling ways for people to vent their anger – NOT including lawsuits and finger pointing contests.

The major news networks are covering this 24/7. As you witness footage of dying wildlife and mucked up beaches, you want to go strangle somebody.

I haven’t checked, but I bet some BP executives literally have had to hire security guards to protect themselves and their families from retaliation.

Blame and accusation is at an all-time high. Everybody who was even remotely involved in the catastrophe feels like a pariah.

Because: The #1 urge that ALL of us have is:

I choose the word “crucify” very deliberately. Everybody’s furious. We’re looking for scapegoat. A fall guy. Somebody to attach the blame to. A damsel to throw in the volcano.

Of course it’s totally understandable. It may take decades to clean this up. A lot of things have been permanently ruined. A lot of damage cannot be undone.

In any case, here’s what happens:

Do you see how incredibly counterproductive the blame and accusation is?

And don’t forget this: ALL of us have, at some time in our life, created a disaster that other people had to clean up.

ALL of us have created messes that we could never clean up ourselves. Other people had to expend their time and money and blood, sweat and tears to fix the mistake we made.

ALL of us have felt the blame and accusation and condemnation – the GRATING SELF HATRED – that you experience when you’ve made a major screw-up.

Some of us went bankrupt and it cost other people and vendors hundreds of thousands of dollars. We were deeply ashamed of what we had done. We wanted to crawl into a hole and die.

Some of us made mistakes in our marriages and relationships. Some of us destroyed our families. Some of us injured spouses and children very deeply.

Some of us wrecked dad’s car and didn’t have two nickels to rub together to pay for it. Dad had to cancel the family vacation just to buy a used car.

Some of us squandered a college education that our parents paid for with all their savings.

Some of us squandered a college education that we ourselves are STILL paying for. Some of us took out $100,000 of student loans and have nothing but beer cans to show for it.

They made a giant mess. Now they have to clean it up. The best thing we can do is assist them as they do this dirty, ugly job.

Imagine the BP senior manager who was in charge when the rig blew up – a guy who’s probably desperately wanted to jump off a building for weeks now – appears before a crowd of people and confesses his failure.

“We know you didn’t do this on purpose. We forgive you. Let’s just roll up our sleeves and solve this thing once and for all.”

Suddenly, his mind freed from condemnation, an idea appears that he never thought of. It’s simple. It’s elegant. It’s inexpensive. It WORKS. The mess begins to dissolve.

And it sets a good precedent for all of us… because all of us make mistakes and all of us have deep regrets. ALL of us need grace.

I would like to suggest that the best thing we can do is to choose to deliberately adopt a spirit of forgiveness to the people who made this huge MISTAKE. I propose that we recognize that nobody at BP or any of their vendors was out to screw up the world.

They were doing what all of us do – they got up every morning and tried to do the best they could at their job, and to make the most of what they’d been given.

I know it’s totally counter-intuitive, but the most powerful, creative, life-giving thing we can bring to this situation is to choose to be graceful instead of pouring out contempt and condemnation.

Live by grace, die with grace.

Which way do you want it?

41 Comments on “BP, the oil spill, and the urge to crucify…. somebody”